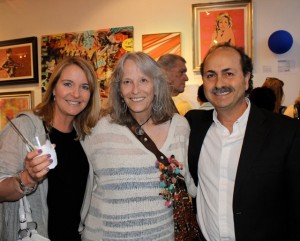 Oh-the-two-of-us-SOLD: 2011 to Lori and Herair Garboushian (Karrie in the middle)

I’m excited to announce that Spiral Series: Bustiers:  “Oh The Two of Us” SOLD at the LAAA annual auction to Lori and Herair Garboushian of Los Angeles.

This is the first Bustier I painted/drew in this series. I started the beginning of this year and I now have 15 finished with more to come.

Being the first one, it was painted most similar to my Spiral Series paintings in its approach with the drawing and painting applied to the “canvas” of a plastic bra form. This seems to be classified as a sculpture since it is free standing  but I did not do the form. I plan to explore that avenue later. I consider this a painting/drawing.

I currently have three more Bustiers in upcoming juried shows. Two assigned in Palo Alto and one assigned to the TAG Open show both in August. And a selection of 5-7 will be displayed at my September show in Topanga Canyon.

I’m excited at the response they are receiving.

With Energy!
Karrie Ross
Los Angeles Fine Artist
Karrie Ross is a Los Angeles Fine Artist who writes about her take on the fine art experience, business and process. She is available for educational panel discussions on her fine art and process. Her artwork is available for solo or group show, installations and public art opportunities. Please contact her at email for more information.