Each artist was asked two seemingly simple questions ; how do we know what is good and who decides ? Today everyone has a chance to voice their opinions and have them heard. How much importance should be put on art criticism? Do we need it now more than ever? In the past, certain ways of working were ignored. How many times has painting been declared “dead”?

The animation in the below image was created using Pixaloop app software.

For many decades realist paintings and drawings were not taken seriously by most art critics. One such critic was Clement Greenberg who, without any formal art education, was hugely influential and made the career of Jackson Pollock. In 1939 Greenberg wrote an essay titled, “Avant-Garde and Kitsch”, where he argued that “all that is academic is kitsch”.

For many decades this was the prevailing view. Now, any subject or way of working is open for an artist to consider and can be taken seriously. There seems to be everything and the kitchen sink being done today and almost all artists can find some kind of audience. Is this a good thing?

*The title for this show was suggested by writer and art critic Peter Frank after discussions with the curator. 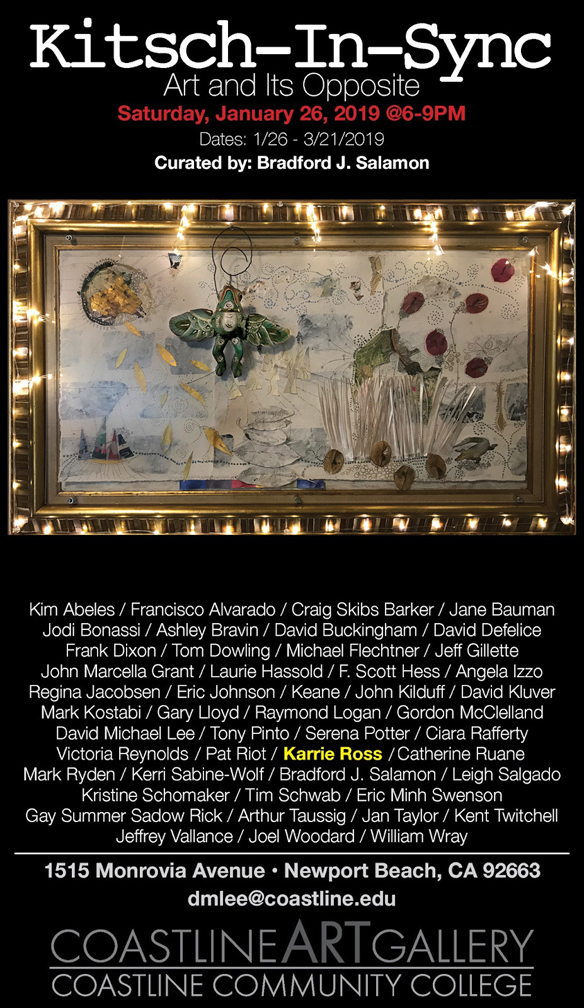 Press for the Exhibition:

Orange County Weekly: (031419) by Dave Barton: I got a mention here.
“Other exceptional work has zero to do with the show’s themes: …. Karrie Ross’ child-like mixed-media Your Stairway Lies in the Whispering Wind; …”

Art&Cake: by Mario Vasquez , got a mention here .
“The works in “Kitsch-in-Sync” explore a range of subjects. … Karrie Ross, … present a kitsch as a vehicle to create new landscapes formed by a consumerist society.”