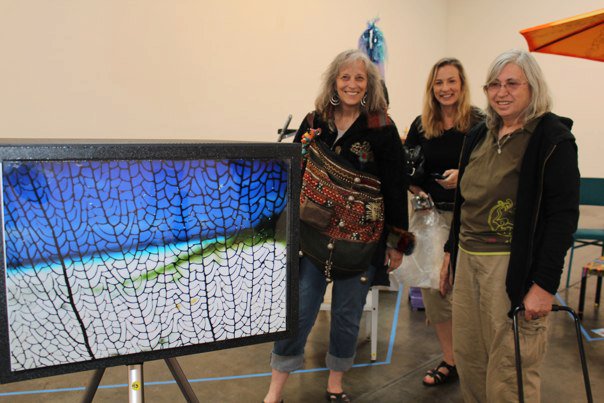 I had the pleasure to take part in the Los Angeles Chain Letter this year. I arrived at 7:30a.m., doors open at 10a.m. and was about the 10th person to go in and place my artwork in pretty much an empty room. Choosing the center of the big X pathway as the position for my sculpture. I decided to take one of the iron pieces in case something happened, it wouldn’t break.

The line really started to fill up about 9a.m. (part of it’s in the video below) and by 12:30pm when I left it was down one side and around the corner and back to almost the driveway entrance… long… No one knew how many artists would fit… at noon the main gallery was up to at least 500-600 and were starting to send artists to the two other locations in Bergamot Station, I was told they cut it off at 1,700… WOW! AND it seems that the drop off event caused a line to form on the I-10 freeway and they shut down the offramp… causing an even greater traffic jam on the streets. The city certainly was aware that we, the artist community, existed that day. Pick-up is the end of August… that will be another day of interest for sure…

Here are my thoughts on the Opening: I have to say the energy at the Chain Letter Opening last night was unlike any other event I’ve attended at Bergamot Station… I noticed that instead of the normal people all over the place walking running into friends and moving from gallery to gallery… the concentration was centered on the lines to get into the gallery spaces to see the art…such a different vibe… we were all guided into this action… it was a very interesting evening indeed! The typical art opening feeling was absent and a feeling of learning was there…. I must say I was kind-a hoping for a feeling of adventure and experience on another level of community… but all in all the experience was a good one.

Shoshana Wayne Gallery at Bergamot Station in Santa Monica, California is hosting a potpourri of art and artists involved in the CHAIN LETTER SHOW.  All based on admiration and the ability of the artwork to exist and exhibit on the floor, this show is also opening simultaneously in other major cities around the world. The Los Angeles CHAIN LETTER show is curated by Christian Cummings & Doug Harvey. The basic concept is that the curator invites 10 artists who then invite 10 artists who then invite 10 artist….and on down the line… but in today’s world of facebook and other social media the extended invites were amazing to see…

For some reason the video seems to stick… you might need to click on it
or move the progress bar by hand to get a best viewing.