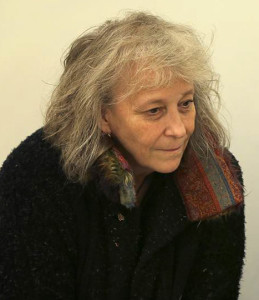 Karrie Ross, a native to Los Angeles, CA, is best known for her diverse use of mediums, wire, collage, acrylic-iridescent-minimalism-flow, pen & ink and watercolors. Ross’ artwork grows out of a fascination with being human, the asking and answering of questions about the self in an intuitive manner, and bringing attention to the value of how one’s energy affects living in this world. She calls it a “Collaboration with Nature”. Among her inspirations are from the art of Louise Bourgeois, Man Ray, MC Escher, Marcel Duchamp, Joan Miro, Dali, Cy Twombly and more, keep her moving forward into a creative world of art. She continues to search for new ways to see, evolve and reinvent explorations of concept, context, form, process, and medium. She is collected throughout the United States and abroad. Her work has been featured in over 170 exhibitions (since 2010), including museum shows at the NYC Children’s Museum of the Arts, Art Museum of South Texas, Torrance Art Museum TAM, and a 6 month traveling show beginning in Italy, next to the Oceanside Museum of Art OMA, ending up at the Riverside Art Museum RAM, Los Angeles Municipal Art Gallery LAMAG, Kellogg University Gallery CalPoly, USC Keck School of Medicine Hoyt Gallery, San Diego Institute of Art, UCRPD University of Riverside, and galleries, non-profits, to project spaces around the Southern California area. Ross has also been highlighted in several publications including Hollywood Today, EasyReader, the Los Angeles Times, USC online, and the Huffington Post.

A native to Los Angeles, Karrie grew up the quintessential Southern Californian “Beach Bunny” and “Hippie” of the 1960s. The self-taught artist began her creative work after high school by making and selling stained-glass sculptures, and working for the local newspaper while living in Vail, Colorado in the mid-1970s moving there after her first husband returned from serving in the U.S. Army and Vietnam. She went into working in the Los Angeles hi-end design industry (Disney, TransAmerica, etc.) then to be a partner in an advertising/promotional agency that transitioned into her current one-person design studio creating books and promotions for self publishing authors. She also served on the Board of Directors for the Art Directors Club of Los Angeles for four years heading the membership and public relations / promotion committees.

Apart from her art, Ross is also an award winning author, and publishes a yearly art-history-project-book spotlighting artists ‘in-life’ stories, “Our Ever Changing World,” Artist ART & Story, which focuses on creating community, and documenting the Art Scene, mostly California and international, over her life time. She also guest curates and organizes collaborations for the art community.

Remember this … you are whole and complete just the way you are. Which really doesn’t mean anything until you’ve taken the journey through the muck and survived—to go through more—with moments of light and great joy in between. With each birthday and new year, I look forward to and live for the in betweens.

ENTER YOUR EMAIL and keep current with my website updates.I post about my new work, where I am showing and a general what's going on ...