AWARD: “Freedom” to be traveling in The Peace Project 2012 Show

Ok… I’m totally excited with this.

Woke up this morning feeling fine… checking my emails I became excited… My “FREEDOM”, the upper portion of one of my Portraits, original size of 72×26, has not only won one of the 14 Inspirational Awards in the  The Peace Project 2012  show…. “Freedom” will also be one of the 156 pieces in the traveling show…. woohoo… There were over 500 entries from around the world. 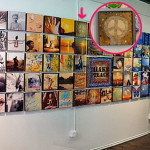 This collective vision will be unveiled on September 22 at the ArtWalk in Deep Ellum, Dallas, TX. The exhibit will then subsequently make several other stops in Southern California and travel to other locations in the United States including San Francisco and New York. An online exhibition will be held simultaneously. Confirmed appearances include:

Hope to see you there!